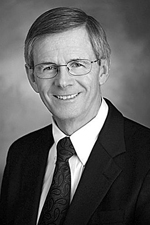 Charles W. Bucknam, Jr. is the firm’s financial consultant. His background is as a commercial banking executive and has over 30 years experience in bank management, commercial lending, and credit administration.

He served as president and CEO of Lyndonbank in Lyndonville, Vermont from 1993 until 2007. The bank was a $160 Million Commercial Bank at the time of its merger with Community National Bank in 2008.

In the years prior to joining Lyndonbank Mr. Bucknam served as president of the Caledonia National Bank of Danville and president of The First National bank of Vermont following a number of years as Vice President with The Howard Bank of Burlington, Vermont.

Prior to his banking career Mr. Bucknam served as a Captain in the United States Air Force 316th T.A.W. stationed at Langley AFB in Virginia.

Mr. Bucknam currently serves as a Director at the Community National Bank, and is a former Trustee at Lyndon Institute.

“I know several people that have used the Bucknam Law Firm to handle their divorces. This firm is always reported to be attentive, caring and efficient in representing their clients. The entire staff is trained, professional and informed of the cases the firm is handling.”
– Superpages, July 23, 2009